My Battle with the Big C

Someone told me that it’s a marathon, not a sprint. I can’t remember who: an oncology nurse, a PA, a BTDT friend. But it is so true; the type of cancer that I was diagnosed with in September of 2015 is my marathon, and I’m still running the race.

I’ve learned so many things in my experience with breast cancer, and one is that there are many different types and sub-types of breast cancer. And there are so many treatment options depending upon the type, stage, etc. So one person might have a double mastectomy, and then be done with treatment. Another might have chemo first to try to shrink the tumor and then have surgery. Or, like me, have a lumpectomy, and then chemo, and then radiation, and then endocrine therapy, because not only was I young (46) the type of cancer that I had was stage 1 invasive ductal carcinoma, ER+, PR+, and HER2+.

HER2+ used to be a death sentence, but with the development of Herceptin in the early 90s, it is now has a much more positive outcome. There is a lot of information out there on the different treatments, so I won’t go into them all! But I will get on my soapbox for just a minute:

You must do your monthly self-exams. No excuses.

And, sure enough, it was the Big C. Let me now say that my last mammogram had been in June, just 2 1/2 months before I found the lump. So, do your monthly self-exams!

September was a whirlwind of doctors and procedures. MRIs, MRI-guided biopsies (they found something else that turned out to be a cyst), ultrasounds and surgeries. The good news after the lumpectomy surgery was that the margins were clear and the cancer had not spread to my lymph nodes. The bad news was that it was HER2+ with a high proliferation rate, which meant I had to have chemotherapy on top of radiation, as well as endocrine therapy. So, another round of doctors and procedures, this time a cardiologist, oncologist, and a port placement so that they didn’t have to give me an IV every time I needed chemo or bloodwork. It was then that I decided to cancel the rest of my shows for the year. The “bad” chemo would be several months, the Herceptin for a year. I would start radiation in April of 2016 at the conclusion of the “bad” chemo.

If you know me, I’m a researcher, so I researched everything I could about the type of cancer I had, the chemo drugs they were giving me and all of the side effects to expect. One of the side effects of one of the drugs was neuropathy, and it was this one that concerned me the most. Losing my hair was not that big of a deal, I knew it would grow back. But the use of my hands was very important to me in my work.

Research showed that cold therapy during chemo can keep neuropathy symptoms from occurring, so I bought 2 sets of cold gloves and booties. I kept them in the deep freeze and transported them to the cancer center in a cooler. My husband dutifully helped me don the gloves and booties during the most toxic chemo drug (Taxol) of my “cocktail”, and then helped me swap the warmed ones with fresh ones halfway through each infusion. Unfortunately, with each successive round of chemo, I still developed neuropathy in my fingers. My oncologist kept dropping the strength of the Taxol, but my symptoms grew worse. My final round of chemo he dropped the Taxol all together. It was my hope that the neuropathy would resolve over time, but it never did. So I stopped working and turned my creative energy to other things, like web design and volunteering for my kids’ school and chorus booster group. 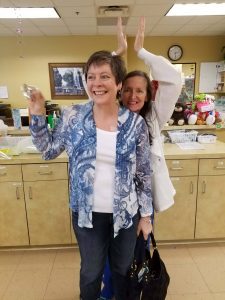 After my final Herceptin infusion, I got to ring a bell. After my last radiation therapy, I got a certificate. But the other therapy that I have to have is endocrine therapy. Due to the ER+ nature of my cancer, I have to make sure there is no estrogen in my body for any cancer to feed on. Again, there are multiple treatment options here, but I chose to take an Aromatase Inhibitor, which must be taken only by postmenopausal patients. Since I was not, I began monthly Zoladex injections to keep me in a medically induced menopausal state so that the AI could work to keep cancer away. I started injections in April, and the AI in June.

I have been through 3 different AI drugs because the side effects had become too severe. Mainly bone and joint pain, but also hot flashes, sweating, and well, you can look up the rest. I have stabilized on Femara, the side effects seem to be the most bearable on it. I continue to get monthly injections, and I get bloodwork done every 3 months to check my liver enzymes and tumor markers. Up until late 2015, the standard treatment for endocrine therapy was 5 years. But a long-term study released right about the time I started the therapy recommended 10 years. Fortunately last month my doctor told me that because my tumor was stage 1, and not lobular, I could safely be happy with 5 years! I have 2 years and 3 months to go on this therapy, and then I will be finished with this marathon.

Recently my daughter expressed interest in learning how to lampwork, so my good friend, Marcy Lamberson, gave her lessons. She then decided to do her STEM science project on the “Chemistry of Colored Glass”, which caused me to dust (okay, maybe heavily scrub!) off the studio and tools for her. I sat down and made some beads, and realized that maybe  I could cope with the numb fingertips and adapt my techniques. It was really fun working with my daughter, and I got excited again about making beads.

Although there are some differences, it’s like they say, “riding a bike” (or horse), it’s coming back to me and I’ve only forgotten a little (and I blame memory loss on the drugs!). I’m happy to be back making beads, and I hope that my creations can make others happy as well.

There is so much more I could write about, but I will leave that for another post. Maybe. 🙂
Thank you for reading my story, visiting my blog, and supporting my art!